Was meeting my relatives and decided to eat out rather than cooking something at home. After doing a bit of research on Zomato, zeroed in on this small Indian joint on Shivam Road. Finding it was a challenge for the place didn’t look like a restaurant from outside. Once in, we realized that the place was named Filmy Tadka because of its filmy décor. It had partitions which looked like film reels and a few filmy posters on the walls.

It’s a small restaurant with around 10 tables, most of which were empty when we walked in. But there was one huge gathering which was making more noise than we could handle. Anyway, we looked at the menu and asked for 3 South Indian Thali, a North Indian Thali for myself and Sambar Rice for amma. The South Indian Thali wasn’t available so we all went for North Indian Thali. We also ordered for a Paneer Mali Tikka for starter. 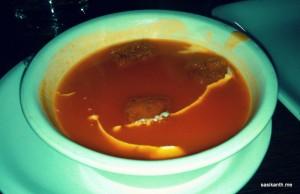 The soup (part of the Thali) was served in about 10 minutes. It was thick, creamy and pretty yum. The waiter was kind enough to serve an extra bowl of soup for amma as well (though she didn’t order Thali). 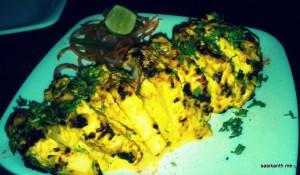 I ordered for the Paneer Malai Tikka because the description was quite tempting. However, it didn’t really live up to my expectations. Not that it was bad; the paneer was pretty fresh and well marinated, but it lacked that punch I was looking for. 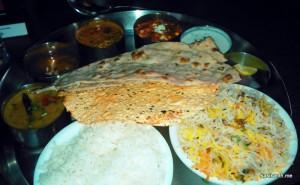 The Thali was served with 2 pieces of roti, Dal, Mixed Vegetable curry, Paneer curry, a bowl of Pulav, white rice, sweet and papad. The roti was soft and both the curries were yum. The paneer curry was actually delicious. Dal derves a mention. We were offered extra roti, and I asked for the same.

The rice (both pulav and white rice) were very cold and we asked them to reheat and serve; and they did so without any row. We were actually under the impression that curries were limited, but they served us more when asked for. The sweet was decent.

Overall, a good meal. There were a few hiccups with respect to the service. There were just two guys managing all the tables and it got difficult as crowd started coming in; we had to constantly keep calling for the waiter before the guy would respond. The ambiance didn’t impress, mainly because of the huge (loud) gathering. That apart, the food turned out to be very good. Give it a shot if you’re in the surrounding area; I’m guessing you won’t be disappointed with the food.

PS: I observed that they’ve changed their menu recently. I hope food and taste are still the same.