Having read a  few good reviews about this place, dropped in one night to get some food for myself, amma and dad. The Big Mouth is a small kiosk next to a couple of other food joints including Ram Ki Bandi. There was one guy managing the place, and he was attending to another order when I reached.

I had to wait for about 10 minutes before he could take my order, and I asked for Couch Potato and Mushroom Italiano sandwiches, Chilli Cheese Burger, and a portion of Pav Bhaji. The guy started making the sandwiches one after the other, and so it took a while for my order to get ready. 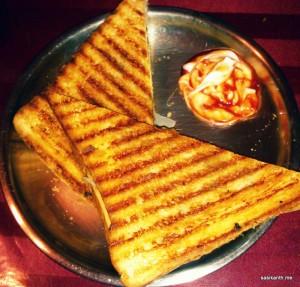 The sandwiches had gone cold by the time I reached home and I had to grill them for a couple of minutes before biting in. The sandwiches were stuffed adequately, and amma loved the Couch Potato sandwich. The Mushroom Italiano sandwich was equally yum, with butter oozing in every bite; one of the best sandwiches I’ve had in Hyderabad. 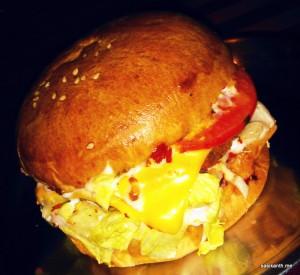 After biting into some yummy sandwiches, it was time for the Burger, which was quite small in size. It was stuffed with cheese, veggies and a thick patty, but overall, wasn’t really palatable. The bun wasn’t fresh, and the patty too didn’t taste good. Kinda disappointing. 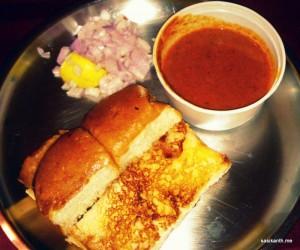 Pav Bhaji was probably an odd choice/order, but I opted for it wanting to taste most of their offerings. This was a major let down as the bhaji was very thin and lacked the punch. The Pav again wasn’t fresh.

Overall, a mixed meal. While the sandwiches were really yum, rest of the meal wasn’t up to the mark. The fact that I had to wait for about 30 minutes, standing, to get my food wasn’t a good experience either; they definitely need more people to manage the store. I might come back for the sandwiches, but then again, for 70 bucks, I could eat something more and fulfilling, can’t I?