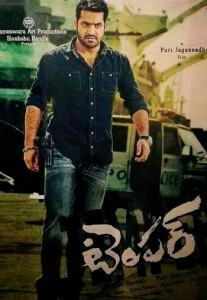 After a disastrous Rabhasa, NTR needed something special for his career to stay alive. And thankfully for him, Temper keeps the ship sailing for a little longer.

Vakkantham Vamsi, who has scripted some duds for NTR in the past (Ashok and Oosaravelli) tries to convey a message through Temper. Puri narrates this story of a corrupt police office in his trademark style, and one can’t miss the similarities to Pokiri and Businessman. The entire first half is stylish, and though not believable, is watchable. The second half forms the crux where the transformation happens. This half happens to be more engaging than the first half, however, the screenplay seemed shabby and rushed through (I hear climax was cut short by 30%, that might be the reason). A little more care on characterization front would have worked wonders.

NTR has put in his heart and soul into the movie and it shows on-screen. His performance in the second half is very good. His dance moves also deserve a special mention. Kajal looks glamorous in her glam-doll role. Prakash Raj is at his best. The surprise package turns out to be Posani, who performs well in a meaty role.

Music by Anoop Rubens is alright. It’s nice to see him finally move away from Manam tunes. Background score by Mani Sharma is pretty good. Cinematography by Shyam K Naidu is spotless. Editing by S R Sekhar is good for the movie never seemed boring, but it also seemed like there were too many cuts made, which kinda ruined the screenplay.

Is it worth your time and money??: I think it is. Plus points are NTR, direction in parts, and length. On the downside, the screenplay in the latter half could have been better. Give it a watch.