There was a foodies meet at Fremmy last Sunday and I dropped in with my cousin. I’ve been wanting to try this place for a while now, so here was an opportunity. It’s a small do, with about 5-6 tables, and open kitchen. It actually gives you a feel of walking into a Subway, with a similar concept in store – make your own food.

As part of the meet, there was a special deal where we were to get either a pizza or burrito, a donut and a drink for 200 bucks. We were handed out a piece of paper with all the options for the make yourself pizza or burrito. We chose for a pizza with garlic base, basic veggies and Paneer in Pesto sauce as an additional topping. For the burrito, we asked for Dal Makhni, veggies and Schezwan Paneer. Do note that the burrito served here is very Indianized. 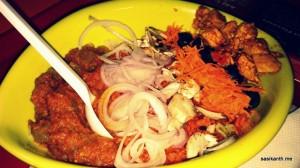 The burrito was served in about 10 minutes and looked very different from what I expected. I knew it was gonna be served in a bowl (ya, not a roll), but still, the concept of serving rice with separated toppings on top didn’t feel like a burrito. What’s worse, it actually looked very different from the burrito served to other foodies. I expected the toppings to be mixed at the least. On taste front though, it tasted alright. The Dal Makhni wasn’t that great by itself, but with the rice and along with the toppings, was good. My cousin loved the rice.

Because of the huge gathering (thanks to the meet), there was some confusion with our pizza and it took a little longer than expected to be served. 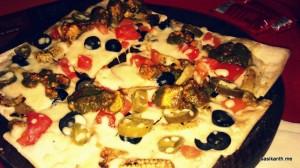 The thin crust pizza looked like a set of crackers put together, topped with cheese and veggies. And it tasted exactly like a cracker. I absolutely loved the crust for it was very different from any pizza I’ve tasted before. I would have preferred for more base sauce, but it was still a yummy pizza.

We were served with Blue Curacao for the drinks which were good. We bought our Donuts (Almond and Chocolate) home, and they were actually very good, especially the almond donut. It was creamy and yummilicious.

Overall, a decent meal. It looks like the guys are still settling in and it might take a while before they get everything right, but worth a visit for sure. Everything is priced reasonably as well. They need a better exhaust system for the place got stuffy after a while. Give it a shot for their pizza and donuts and lemme know how it goes. 🙂