After visiting this place in April, here I was again with amma and bro. I was craving for some awesome Paneer Butter Masala, and I was hoping this place wouldn’t disappoint. Being a Sunday night, the place was packed and we had to wait for about 10 minutes before we found a table.

After we were seated, no one attended to us for almost another 10 minutes. We had to call for the waiter, water was served, but then we were eluded again. When someone finally came back, we ordered for an Aloo Paneer Sheekh Kabab for starters, Paneer Butter Masala, Malai Kofta, Stuffed Kulcha and Roti. We also ordered for Mushroom Masala and Jeera Rice towards the end. 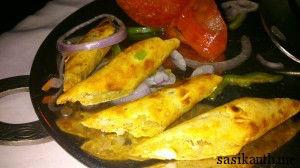 The guy did tell us that it would take a while for the kababs, but it took kinda forever. And when they did arrive, the quantity was very disappointing. Eight small rolls were served with lots of green salad. The kababs too weren’t that great. They were a little under-cooked an I could taste the flour. A let down!! 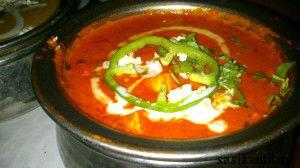 After the kabab fiasco, and another 10 minute wait, rest of the food was served. The PBM was not as good as I was hoping it to be, but still was pretty decent. The paneer wasn’t fresh, but the gravy was creamy and mildly spicy. 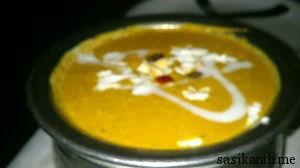 The Malai Kofta was the better dish of the two. The kofta was soft and yum and the gravy wasn’t sweet, but spicy, just the way I like it. 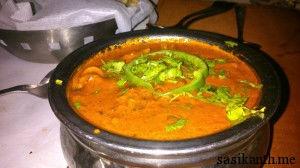 The Mushroom Masala looked similar to the PBM, but the gravy was quite different. This one had a more tangy gravy, and the mushrooms were fresh and tender. 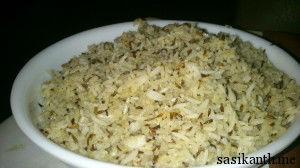 The Jeera Rice had a nice aroma, and tasted great. The Roti was a little hard, but the Stuffed Kulcha was pretty good.

Overall, a nice meal. Except for the starter, the rest of the food was decent enough. It’s nothing extraordinary, but just plain good food. The service was a let down on this particular night though. The meal turned out to be more expensive than the last time around (for 4 people), but it was probably because we ordered more dishes. I didn’t get the Paneer Butter Masala I was craving for, but a decent meal nevertheless. If you haven’t tried it yet, give it a shot!