Dropped in at Heart Cup Coffee at Trimulgherry late afternoon on a Monday. The place was empty and we were the only guys at the joint. We later realized that there were more people sitting inside the alcoholic section. Part of the cafe was being turned into Quiznos, so the place seemed quite vacant.

They have a huge beverage menu to choose from, so it took quite a while for us to decide on stuff. After like forever, my friend ordered for a Brownie Shake and Chicken Nuggets, while I ordered an Apple Pie Shake and a Paneer and Spinach Sandwich.

The Brownie Shake was served first in a tall glass. It had chunks of brownie on the top, which tasted luscious. The drink was very chocolaty and good.

The Apple Pie Shake was good as well, but there was too much pie blended into the shake. This made it really thick and too sweet. I would have preferred it a little more milky. 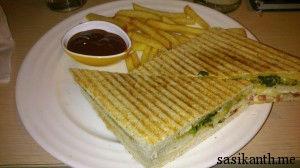 After a long wait, the Panner and Spinach Sandwich was served, which was decent enough. The French Fries served along were crispy. I asked for some coleslaw, which was very good. 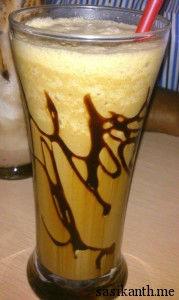 While I was waiting for my sandwich, my friend happened to finish his Brownie shake and ordered for a Mocha Frappe. The frappe had too much ice and was a little too strong for my taste.

Overall, a decent experience. The Brownie shake, the sandwich and the nuggets were good while the rest were average. Being the only people in the cafe, we expected quick service from them, but it took forever for the beverages and food to be served. I guess it’s better to visit this place in the evenings when its more crowded than in the afternoons. On the whole, a nice hangout zone with some good drinks and food.