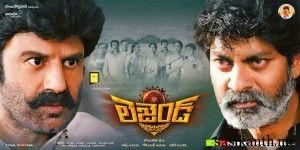 Before it is taken off theaters due to elections, I ventured out to watch the “Lion Roar”. And roar he did. I’ve never been a far of Balakrishna, and mostly find it disgusting when he romances girls younger than his daughters. But if I choose to ignore that, Legend is actually a decent film.

Boyapati Srinu likes his movies being grand, and he made sure this film is no less. He knows the pulse of the masses and Balayya’s strengths, and therefore was able to pull off a loud yet watchable movie. Direction is neat, and I thought the screenplay was very good. However, the second half could have been short and crisp. Dialogues by M. Ratnam are a definite plus point to the film.

On acting front, Balakrishna is perfect as Jai Dev. Except for the fact that he wears his watch over his shirt sleeve, there’s no false note in his acting. However, he either needs to stop romancing young girls, or lose tons of weight to make sure that he doesn’t look like their dad. Both Radhika Apte and Sonal Chauhan are decent, while the rest are alright. The ‘Nanamma’ character could have been cast better though. Though its Balayya’s movie, the undoubted star turns out to be Jagapathi Babu. His antics and body language as the antagonist are just brilliant. Big thanks to Srinu for showcasing this side of Jagapathi Babu.

On technical front, while music by Devi Sri Prasad is mediocre, editing is neat and cinematography is pretty good. Production values are excellent, for the richness of the sets and locations could be seen on-screen.

Is it worth your time and money??: If you can sit through loud movies, and can stand Balayya, then yes. The first half is entertaining and short, while the second half is full of violence and at times, a drag. Plus points are brilliant acting by Jagapathi Babu and strong dialogues. Overall, a decent film.

Worth mention: Balayya’s dialogue targeting Chiranjeevi in the climax.