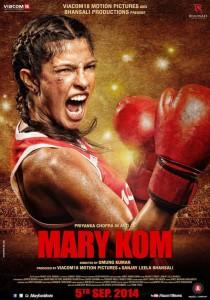 Mary Kom is an Indian boxing legend, there’s absolutely no doubt about that. But was it necessary to make a biographical movie on her, this I am not sure of. At least, the movie didn’t convey the necessity thanks to its feeble script.

Directed by newbie Omung Kumar, Mary Kom is a straight forward story of the boxers life. While it puts across Mary’s career in a crisp manner, what it really doesn’t show are the challenged she might have come across in reality. A film like Rocky works because of challenges, and unfortunately in the movie, there was not a real challenge until the climax. I’m sure Mary had to face many more challenges and push backs in her life to become what she is today. The movie puts across a couple, but these didn’t really make an impact for they seemed very contrived. Add to this a snail paced screenplay by Saiwyn Quadras, and the impact you’ve wanted to create is gone. Nevertheless, direction by Omung is pretty neat.

Priyanka might not look like Mary Kom, but surely brings across the boxers life in a convincing manner. She has put a lot of effort into the movie and it shows on the screen. However, it would have been nice if she’d avoided make-up and looked more natural. Darshan Kumar comes up with a commendable performance as Mary’s husband, and Sunil Thapa is pretty good as her coach. The rest of the cast is alright.

Music and background score are pretty good, and a couple of tunes are catchy. Editing by Rajesh Pandey and Sanjay Leela Bhansali is decent. Cinematography by Keiko Nakahara is of top-notch quality and deserves a special mention.

Is it worth your time and money??: But for highlighting Mary Kom’s life, the movie as such doesn’t achieve anything else and that’s where the problem lies. While Priyanka puts up a mighty performance, Wikipedia probably gives a better insight into Mary’s life than the movie does. Bottom line, Mary Kom definitely isn’t a must watch of the season, but it isn’t a bad watch either.

Worth mention: Priyanka’s performance in the climax and the cinematography.