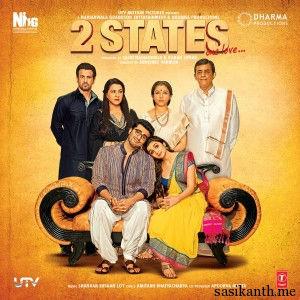 When I first read the book 2 States: The Story of My Marriage, in 2009, I thought it was decent, though it went a bit overboard at times. Come 2014, like any other Chetan Bhagat book, the movie is made, and this time around, I thought it went overboard in a different way, leaving out some of the niceties, nuances and struggles showcased in the book.

Adapted for screen by first time director Abhishek Verman, the movie kicks off well – with both our protagonists Krish and Ananya meeting at IIM-A, becoming friends, moving in together, and later, wanting to get married. The first half of the film is joyful and entertaining, but the second half seemed long and boring. It all seemed like a fairy tale, without any real challenges in the end. Except for one scene in which Krish is served food on Banana leaf, the cultural differences were not presented. It was just “He’s Punjabi, so don’t marry him” and vice-versa, with no real conflict point established. I also didn’t like the way the story was narrated at a psychiatrist for it did not add anything to the film. While direction is decent, screenplay, especially in the second half could have been better.

Arjun and Alia shine in their roles, and have matured as actors when compared to their debut films. However, not once did Alia look like a Tamil Brahmin. Revathi is simple as Ananya’s mom. Amrita Singh has a meaty role and she did justice to the T. Ronit Roy is pretty good.

I didn’t realize that the music was by Shankar-Ehsaan-Loy until the end credits, for it sounded very different from their usual. It was refreshing. Editing by Namrata Rao is alright, while cinematography by Binod Pradhan is decent. I’m bored watching the grand sets in all the Dharma movies. Right from the hostel rooms at IIM-A to the houses Krish and Ananya live in, and the wedding, everything is so majestic and full of money! When will Karan Johar realize that middle class people don’t live like that??

Is it worth your time and money??: I really enjoyed the first half but cringed a bit in the second because it all seemed too easy. While the story could have been more powerful, the cast delivers with fine performances to make the film work. Overall, just a decent watch.