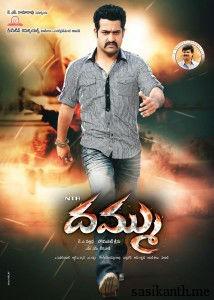 After Racha, looks like we have another winner at hand!! It’s like NTR declaring ‘When RCT can make such a dumb ass flick, why can’t I??’. God, save me from this madness!!

I sometimes wonder if these guys watch their films before releasing them. I can understand if Balakrishna or Mohan Babu do such pathetic films, but young actors like RCT or NTR working on such unreasonable scripts is not justified. Wonder when these guys will learn!!

Boyapati Srinu is one of the most enthusiastic directors I’ve seen in recent times. He is so enthusiastic, that he forgets all sensibilities. Story by M. Ratnam is about age-old family feuds, and Boyapati adds so much drama to it that we start to yawn or even maybe crack a joke when some one’s dying on-screen. The story calls for lot of sentiment, but Srinu was never able to generate any strong emotions. The relation between mother, sisters and the son seemed so artificial. And the acting is sometimes so loud. The screenplay is not so great as well. The first half is bearable, and even the second half is tolerable until the last 30 minutes or so. And then, he ruins it. With long sentimental dialogues added to some pathetic direction, the movie starts to get onto your nerves. One third of the theater got empty on the first day for this last few minutes, imagine that!!

On the acting front, almost everyone is wasted. Bramhanadam, Ali, Bhanu Priya, Suman, Abhinaya, Kota, etc., all looked out-of-place. Except for Nassar and Venu, no one else had significant screen presence. Trisha and Karthika had no footage, and were only there for the songs. Karthika’s character was so bloody irritating to add to the drama/trauma.

NTR happens to be the only saving grace of the sinking boat. He comes up with a dynamic performance and this can be rated as one of his best (Thank god that unlike someone, he can act!!). His coming timing, and mannerisms are really good. On the downside, he has put on tons of weight, which I think effected his dancing capabilities. He looked like his dad, Harikrishna, in a couple of scenes, which was actually scary (We don’t need another HK, please!!). With such acting talent, I only wish he picked better scripts.

On technical front, the movie fares average. Music by Keeravani is alright, but the background music was a mixed bag. Cinematography by Arthur Wilson is pretty good. The action sequences were well captured. Art by Anand Sai was sad. We’ve been seeing the same sets for almost every film now. Editing by Kotagiri Venketeswara Rao is decent enough for the pathetic script. I wish he could edit the last 30 minutes to 3 minutes though. The graphic work is commendable.

Overall, go watch this flick only if you happen to be a family or NTR fan. There is big possibility that you might get disappointed too, but hey, if you don’t watch it, who else will?? 😀

Acting: 6/10
Story-Screenplay-Direction: 2/10
Technical Aspects: 6/10
Is it worth your time and money??: No, unless you happen to be this huge NTR fan.