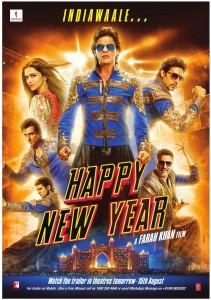 They might have had their differences in the past, but Farah and SRK do have some great chemistry together; and that comes across on their hat-trick venture Happy New Year!

It’s no new story and like with the recent few movies, you’ve seen it all before. A family is destroyed because of the antagonist, and the family is thirsty for revenge (doesn’t this remind you of Bang Bang??). The family here happens to be a bunch of buddies, who decide to rob a high security vault, aka Ocean Eleven style, to put the villain in trouble. Though it all seems redundant, Farah does a decent job of keeping the film on track without making it boring. There is a lot of richness associated with the movie which gives it a nice look and feel. While direction is pretty neat, the screenplay could have been a better. A movie like this needed to be crisp, and a run time of 180 minutes just bogs you down. Nevertheless, she does a good job altogether for the movie is pretty entertaining. And ya, worth mention are the witty one-liners from old classics (should I be referring them to as classics? :-O)

On acting front, it’s SRK show all the way. And for once (after long), he puts away his stupid antics and comes up with a neat performance. While his body did look good, his face is starting to show age. Deepika comes into the movie one hour through, and does a decent job. I thought she looks over-toned, and would have looked better with some flesh on her belly. Abhishek overacts (like usual); good for him that his character needed over-action. Boman Irani is pretty good as the old chap, while he too seemed to overact on occasions. It’s nice to see Sonu Sood playing a positive role, and he comes up with a good act. However, his intro and first fight were sad and totally unnecessary.

Music by Vishal-Shekhar is could have been way better. But for the title track, everything else is more or less mediocre. Background score by John Stewart Eduri is decent. Editing by Anand Subaya could have been crisper. As already mentioned, the length pulls you down and a few edits seem really necessary. Cinematography by Manush Nandan is neat. Dialogues by Mayur Puri are entertaining. On the downside, you’d expect better dances in a film by a choreographer.

Is it worth your time and money??: The movie is entertaining and you never tend to get bored. The plus points are star cast and lavish sets and locales, while the length and pace play spoil sport. A few edits would make the film more engaging. It’s a good watch nevertheless, but only if you walk in without any pretensions; otherwise, you’d find it to be another run-off-the-mill flashy masala films.

Worth mention: The dumbness of the entire plot.